Acoustics question about seismology and microphones

In order to not hi-jack the science thread, and seeing as this is a sound and microphones question, I’ll park it here if you guys don’t mind. Dave, Stan, and I were chatting about how sound waves are used to determine the interior of planets. And how sound waves move though different states of matter.

The main difference between P and S waves is that P waves travel through the body of the planet whereas S waves are confined to the near surface. Both types are detected with geophones and seismometers

What’s the difference between a geophone and seismometer? I’m guessing these are microphonic sensors?

Most animations about these online make it appear as though the P wave doesn’t oscillate the same way the S wave does. Yet you say it still has a frequency. I thought oscillation was required in order to have a sound.

I understand the P wave as a transfer of energy from one object to another through molecular bond. Where or how does it oscillate? So I’m a little confused as to how a P wave can produce a sound.

A geophone turns ground motion into a voltage, so they’re not truly microphones, but are analogous to them. The have wire-wrapped masses suspended inside a magnet, and when ground shaking makes the mass swing inside the fixed magnet, it induces a voltage. EDIT: strictly speaking, the “fixed” piece is moving because it’s anchored to the ground, and the ground is moving. The suspended mass stays still because it’s suspended, by simple inertia.

Here’s a good primer on how a geophone works:

Seismometers are not fundamentally different, also operating on the principle of differential motion between a suspended mass and a fixed frame, they’re just set up differently in order to measure ground motions occurring in different directions. Geophones are basically simple seismometers.

I understand the P wave as a transfer of energy from one object to another through molecular bond. Where or how does it oscillate? So I’m a little confused as to how a P wave can produce a sound.

I think any kind of wave on the electromagnetic spectrum oscillates, be it visible light, X-rays, Gamma Rays, radio waves, microwaves, Infra-Red, Ultra-Violet. Sound waves have some similar characteristics, but sound and ‘physical’ vibration travel through a medium of dense “matter” to cause their effect. The EM spectrum isn’t necessarily non-physical or non-matter, but can work independently from dense matter - i.e. in the vacuum of space.

I think a similar question came up when one of the space probes recorded the “sound” of one of the planets, maybe Jupiter, and we talked about it on here or RR. It wasn’t really recording sound per se, as there’s no such thing as sound in the vacuum of space. It was recording EM waves from the planet’s magnetic field, and converting those into sound per an algorithm so humans could go “oooh, aaah”. If our planet vibrates in some way, through dense matter, it’s not “sound” until it hits the atmosphere and stimulates air particles which the human ear can detect. In other words, vibration or oscillation can occur without sound, and does so in many cases! Sound is only one possible expression.

The Schumann Resonance might be a good example of this? The SR is the result of constant vibration through the Earth of - I would guess - a type of P wave. It also interacts with the Ionosphere and would probably be audible if the frequency was higher. At 7.83Hz on average, it’s just not audible to human ears, but might be to some animals or insects. I believe it is at least partially caused by lightning strikes across the Earth’s surface, which generate the vibrations and the “resonance” created from them.

Supposedly, the ancient Vedic practice of meditating on “OM” or “Aum” came from the perception of this planetary vibration by sages and rishis in deep meditative states.

How strange to see a thread about seismology - I can present this as I would to a class of 12 year olds. With a slinky.

Take a slinky, hold one end and then stretch it and get someone to hold the other end. (I actually do these demos). With you hand create a wave by moving your hand towards the other end of the spring and then pull back sharply. You’ll create a P wave, that we sometimes back in the day used to call a compression wave. Technically you’re squashing molecules together, and they react by pushing back to where they were (that’s a simplified version). The effect of this push and push-back is a travelling of this compression through a medium. In terms of sound, air is good at this, but not as good as liquid or solid. Liquid is in constant flux thus you don’t get a uniform direction of sound, but solid media is extremely efficient at this transmission.

For S waves, you would would whip the slinky and watch the wave travel in an up and down motion. These just can’t be transmitted in water, because water again is in flux so any traverse motion is just counteracted by interference.

Typically we think of sound as waves, and draw them as an actual wave in 2D form. In reality sound waves travel like P waves, with compressions of air reaching your ear drums. How fast or slow these compressions occur are the frequency of the sound, and the amount of compressions are the volume or amplitude of the sound.

Great stuff guys!! Is this a great group or what??

This one made me laugh.

Hey Dr Keith, could the acoustic environment you picked to record your video BE any worse?

Funky hair style. He kind of reminds me of Woody Allen.

Is this a great group or what??

A geophone turns ground motion into a voltage, so they’re not truly microphones, but are analogous to them. The have wire-wrapped masses suspended inside a magnet, and when ground shaking makes the mass swing inside the fixed magnet, it induces a voltage. EDIT: strictly speaking, the “fixed” piece is moving because it’s anchored to the ground, and the ground is moving. The suspended mass stays still because it’s suspended, by simple inertia.

I’m trying to use my brain, but I’m way out of my depth here. 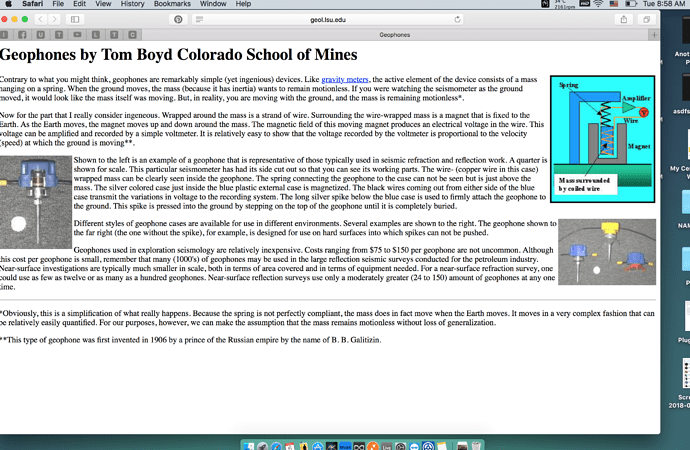 I clicked on the link Dave provided. Something is instinctively telling me this is like a guitar pickup but I can’t figure out how.

Is this more like a Peizzo (that’s sensing vibrations) or a single coil bridge pickup on a tele? I’m thrown because I know there are coiled wires on the Tele pickup and I know that there are magnets and the strings are magnetic but I don’t understand how all that relates to itself.

The have wire-wrapped masses suspended inside a magnet, and when ground shaking makes the mass swing inside the fixed magnet, it induces a voltage.

Do mics not have a magnet? Is that the big difference?

Or is the difference more that with a vocal condenser mic (Lets use Daves AT 4040 for example) the mic itself is completely stationary (when set in a vocal booth) and the exterior body of the mic itself does not interact with vibrations whatsoever? (Unless its gets bumped or moved)

Both P and S waves oscillate.

Sorry to have to ask this, but how is oscillation possible in a P wave? I assumed oscillation required a vertical distance from crest to trough. No?

Using @madpsychot’s animation, is the basically idea that P wave technically oscillating, but doing so along the X axis instead?

Yep, oscillation is in the direction of motion, toward you and away from you, not at right angles to it, or “side to side” as viewed with it coming at you. Oscillation implies nothing about its sense of direction, only that there is regular repeating cyclicity to whatever phenomenon is said to be oscillating. Can happen in any orientation.

I am not a hardware expert but I think most mics pick up sound vibrations with a delicate and sensitive membrane of some kind, in the capsule… e.g. the “diaphraghm” of a SDC or LDC. This is what converts the sound energy in the air to an electronic signal, as I understand it, so no swinging magnets.

And the analogy to a guitar pickup is not bad, except that the bits that are oscillating relative to the others are different than a geophone setup. It is all part of the beauty of magnetism inducing an electric current, most elegantly laid out in Faraday’s Equations (if I remember my undergrad physics correctly)…

Oscillation implies nothing about its sense of direction, only that there is regular repeating cyclicity

That could be the lyric of a Rush song!

Oscillate means simply a back and forth movement of something:

Oscillation is the repetitive variation, typically in time, of some measure about a central value (often a point of equilibrium) or between two or more different states. The term vibration is precisely used to describe mechanical oscillation. Familiar examples of oscillation include a swinging pendulum and alternating current. Oscillations occur not only in mechanical systems but also in dynamic systems in virtually every area of science: for example the beating of the human heart (for circulati...

For mics, I find their workings utterly beautiful. The are literally the reverse of a speaker, wherein sound oscillations will move a membrane of some kind through a magnetic field, which itself is connected to a coil of wire in which electricity is generated by the movement. The backward and forward motion of this wire will literally produce an AC voltage, which can be recorded and played back. I don’t know about you guys, but this stuff fascinates me to no end!

I went to a pub lecture a couple of years ago about how they can determine the physical properties of the interior of the sun by the way waves cause differing oscillations in different parts of the star’s surface. They essentially ring like bells.I thought it was cool.