Oops! I did it again. This is the third of my James McMurtry covers in a “recorded live” setting, just me and a guitar. Doing these both because it’s fun and to provide demo how-to recordings for JM’s unorthodox guitar technique. He uses three tunings/chord shape sets most commonly, and with this vid I now have a representative example of each.

This is called St. Mary Of The Woods, title track from his 2002 album, and it illustrates one of JM’s signature setups, which I call the “McTuning”: strings tuned to CGDGBD, and then a capo on fret V, but covering all but the lowest string. It’s thus a kind of open C tuning, with that low C giving both a resonant drone thing going on, but also a bass-like string suitable for behind-the-capo walkups, as in the choruses. Maybe a third of his songs are in this tuning, which I could not figure out until seeing it up close on his live streams.

[BTW I did a full studio version cover of this several years ago here in BTR.]

The song tells the story of a woman trying to make it in the music biz, who apparently attended an all-female liberal arts college of that name in Indiana. (The school became coed in 2015 after 175 years.) So that would be the “nest” she might fly back to…

Exact same setup as the previous two of these: recorded both on the Android smartphone and with my AT4040 condenser, blended and panned either side, bit of EQ and light compression. Thanks for watching/listening! 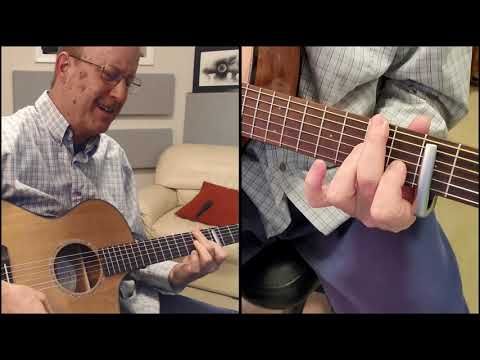 Nice! That open top string combined with the capo is a cunning tactic - never seen that one before - cool

Nice! That open top string combined with the capo is a cunning tactic - never seen that one before

Thanks Andrew! Yeah, the first time I saw that tuning and setup, my gob was well and truly smacked. Sometimes he’ll move that whole thing up one step, moving the five-string capo to fret VII and putting a second capo across all six on fret II, to bring it into key of D. No wonder I could never figure it out!

Cool stuff @Chordwainer, the lyrics are great but I focus on the guitar stuff and the capo/tuning thing is pretty neat, I hear that sound and I think huh? It’s obvious when I see how you do it but I never would have figured it out, I always thought either capo up or capo down. I see they have some really crazy ones now like this thing.

Ingo, I have one of those Spider capos! It’s wild to play around with, but hard to capture what one is doing for reproducing later. It needs some kind of digital recall built in

It needs some kind of digital recall built in

I seem to remember you have one of those variax guitars, and doesn’t it do that?

It does! But that doesn’t help me when I want to capo an acoustic…

So would you ever use the variax in place of an acoustic? I’ve heard that the resonator patch is pretty good. Just asking, I’ve never tried one.

So would you ever use the variax in place of an acoustic? I’ve heard that the resonator patch is pretty good.

I’ve used it extensively in recordings, and in fact have used the reso models, and they sound good in a mix. But standing alone, not so much, and the same is true for the other acoustic models. The electric models are all excellent, in contrast, they sound really good. But I wouldn’t use the Variax to do something solo-acoustic like this, for sure.

That acoustic is sounding really nice. These performance videos are always interesting and enjoyable.

You’ve mentioned that you’re recording these performances in your treated room that has sound absorption. I know how much this kind of treatment can improve the sounds of a musical performance. Most of my life I’ve rehearsed and performed in untreated rooms but back in 1992 when I was in a band with my younger and older brother, we carpeted the walls, floors and ceilings in a small basement, in the house my brothers were renting. We were amazed at how great our rehearsals sounded. It’s like every instrument and voice came through so clear, almost as if it was a very good recording. We also turned down the volumes on our electric guitar, bass and vocals more than we had in other rehearsal spots. The resulting mix of music is something that we still talk about with a bit of amazement, today. I think we got that sound because we completely deadened the small basement. I don’t think there was any spot that we didn’t cover with some kind of sound absorption. I might have to try this sort of thing again.

I know how much this kind of treatment can improve the sounds of a musical performance.

Amen to that! Single best investment I’ve made by far was those panels. I’m really happy with the recordings I get in there, it’s just right for the largely acoustic-based stuff I tend to favor. And the room I took for my studio when we moved here is smaller than the one in the old house, so the same panels cover nearly all the wall space now, with two corners hosting large triangular bass traps. No reflections in there!

That’s a whole lot to memorize Dave. Got two variables…playin and singing. Both are near perfect. This just freakin mellows me right out. congrats again ole friend

Thanks Paul! I did have the lyrics printed out and sitting on the desk in front of me, just in case, but this is one I do know by heart