I’ve been browsing back through Chris Lord Alge and Warren Huarts mixes and re-tracing some of their steps in their mix processes. Here’s a few things I’ve been experimenting with lately to get vocals wider, smoother, shiny, and clean.

The SSL and Neve 1073. Just the preamp in these things alone make a vocal pop. They’re similar to the Slate VCC. Takes a little longer to dial them in than the Slate, and they’re way more expensive. But worth every penny once you get used to using them! 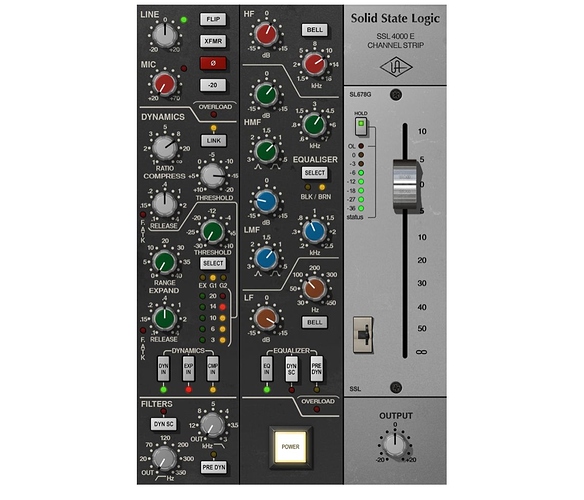 This is the Saphira from Waves. The ONLY thing this does, is add even and odd order harmonics to your source. Its really neat. The ‘harmonic modes’ A-G are different presets of combinations of harmonics, similar to drawbar settings on a Hammond B3. This thing is amazing for getting a dense, thick, rich vocal without ever loosing clarity or smashing it into a pumping sucking mess by over compressing.

This is the saturator to end all saturators in my opinion. First of all, I love working with multi band anything. Anytime I can distort only the frequency region I need, and leave the others stuff alone, I go for it. I love being able to focus the drive in the 1k range to add bite and crunch. Or focus it from 4-8k to help make breathiness float over the top of a guitar heavy mix. You also get a ton of different models. Like Warm Tape (as pictured) to tubes, transistor amp drive, vinyl etc… That in and of itself would get me by, but add the stuff at the bottom for warping and mangling and you just have a limitless number of different ways you can pound and abuse a source if you’re in a bad mood and just feel like killing something. 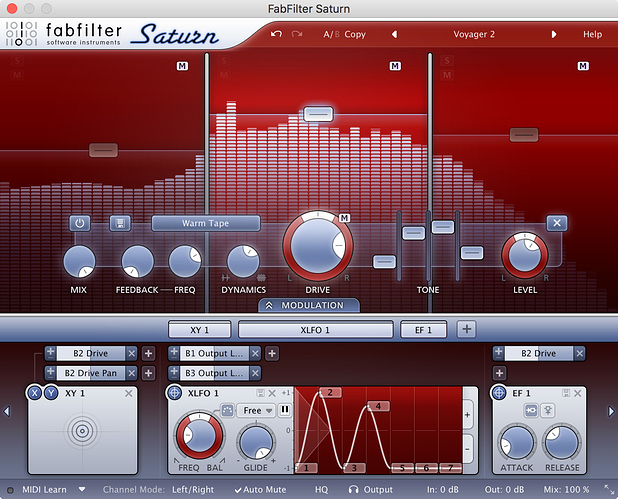 Now speaking of multi-band units, this is a hybrid that acts a little bit like the UAD Sonnox Inflator marries the Saturn, then has an affair with the Cobalt. Its another Waves plugin where (like the R-Vox), no one really knows whats going on under the sheets, but whatever’s happening down there, it feels really really good. I like this for the ease of dialing it in. Yes, the Izotope ozone has a similar feature, but this one saves you from weeding through a bunch of screens to get there, and its not a ram hog. Its also a little different than the Ozone multi-band enhancer. I like the strait forwardness of this one. Point it where you want it, and push the fader up.

For a long time the SPL was the undisputed reigning champ of the transient designer field. If there was ever a serious challenger to this 2 knob beast, I’d like to know what it was. Recently, we’ve seen a lot of newcomers, and they’re very good. The Waves Smack Attack caught my attention because of the flexibility. Yoad Nevo was notorious for using the Trans-X mid-way through his vocal chain to help manage the damage that some compressors do on heavy settings. This thing does that just as well, but it can be used for tone shaping in ALL KINDS of ways the Trans-X and the SPL can not. I really do like the visual display. Its sooooo pretty (for those of us who are easily amused). 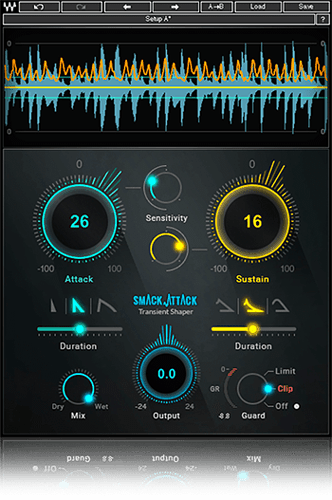 Lo-Fi is the shit!

For years I used the H-delay overlooking possibly one of its coolest features. THE LO-FI BUTTON!!. Wow. I first started noticing the power of lo-fi when Warren Huart would use it generously in his tutorial videos. At first I didn’t think the plugin was nearly as important as the technique. Since then I’ve come to realize the plugin choice is part of the technique, especially with layering complex combinations of delays. I realized this when I started understanding how Slate and UAD go to painstaking lengths to model the hardware when it clips and distorts.

Enter junk like this: The EchoPlex. What makes it any different than a stock delay? You can beat the hell out of it, and it loves you for it. 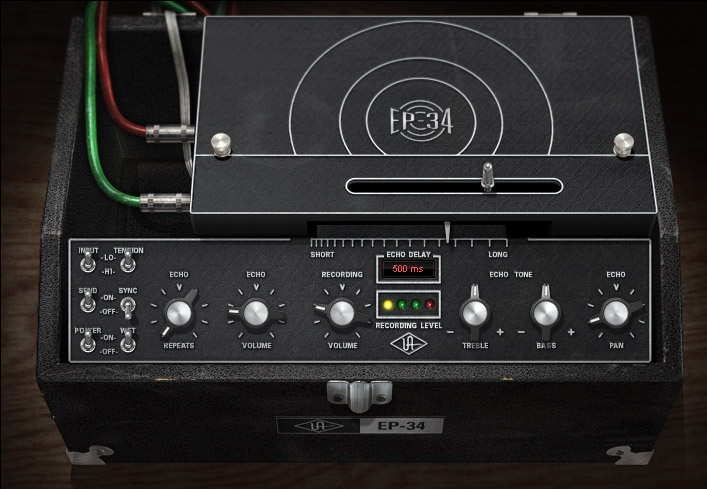 So what I came to realize, is that its not about the delay. A stock Reaper plugin is perfectly capable of regurgitating its source. Its about the CHARACTER of the delay. Yes, you can dirty up a normal delay. But I just like plugins that allow you to get to that god awful mess of a slap effect with the push of a few buttons.

So what is the difference between one of these… 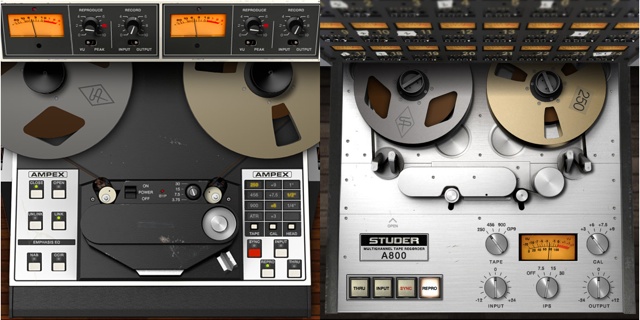 …vs throwing a tape emulating distortion on a channel? Why own this plugin when you have tape distortion built into your Izotope and FabFilter plugins? The answer is that its not the same. I didn’t realize this until I went back through videos where Chris Lord-Alge, when mixing in the box, would mercilessly bombard a session with tape emulators to try and get back what he was used to hearing every day from his reel-to-reel.

One major difference is that you can not use these r-2-r sims in multi band mode like you can on the Izotope and FabFilter plugins. However, a distinct advantage is that the Izotope/FF plugs do not have IPS control. Which under certain conditions, beings to act a bit like the lo-fi simulators I was raving about earlier. The other thing you DON’T get in the Izotope/FF tape emulation is transistor modeling.

There is a question of where and how these tape emulators are best used. Chris Lord-Alge…put it everywhere. He had a ton of plugin console drive emulators cranked to 100%. Then he used tape sims for even more drive. Then if he needed even more than that, he’d pull up a nasty sounding piece of shit Slate Trimmer and distort it further. Then I watched in disbelief, as he sent that horrendous sounding garble of distortion into an 1176. But you know what… his finished mix sounded great. The moral of my story, is this. Picture different flavors of tape emulation like different shades of color (say…blue) on a painters palette. If you know what you’re doing, you can use those different blue’s for many different things, and in the end a painting looks amazing.

Making Use of Proportional and Passive EQ.

I know very little about the science behind EQ. I wish someone here could tell me why the Curve Bender, Millenia, Manley, and API seem to much easier to dial into a vocal sweet spot. If I could only ever use one of these 4 EQs for the rest of my life on a vocal (maybe plus a Pultec) I think I’d be happy. Thoughts?

ill be working with the Slate stuff this year. I paid for the everything bundle back in like July and just now got around to Dling it lol (for my new super laptop)

“Manley”, whoever developed that must be overcompensating. That is a plethora of information, I’m gonna need a few years to soak that in.

“Manley”, whoever developed that must be overcompensating.

Not really. Evanna Manley…the CEO of the company…It’s her last name. Sorry. No big dramatic story there.

As of now the best way I’ve found to make my vocals pop is by singing as best as I can and manually doubling them.

Very interested in delving further into your post when I have time…I want to find a “go to” methodology for getting great vocal tracks …,and also great sounding heavy, overdriven guitars, drums and bass.

Seems like I don’t have as much difficulty getting clean acoustic guitar sounds as I do getting the big heavy metal sound. I find getting that big, metal production much harder to achieve than a soft, songwriter or pop production…, which is strange, because I consider myself to be a hard rocker.